Want to move house like a pro? Here’s six moving hacks from HOOD that will turn your next shift into a tightly run operation.

Want to move house like a pro? Here’s six moving hacks that will turn your next shift into a tightly run operation.

Moving is often fun, and comes at an exciting time in your life, but it’s also famously laborious. HOOD has put together six simple moving hacks you can add to your packing procedures that will save some serious time, space, money and effort.

A typical move would probably see suitcases packed with flat folded clothes, like you’re packing for a holiday. As long as your clothes don’t end up haphazardly stuffed into bags, or messily rolled into bunches, the flat pack method is the best method for most people.

For those who truly want to optimise their clothes packing space – connoisseurs of moving hacks – there is a trick for getting your shirts and pants to take up as little space as possible. It’s called the ‘army roll’ or ‘ranger roll’.

Here’s a really simple guide to follow, which includes extra tips for combining multiple shirts, pants and socks into a single roll.

It might seem at first like the process of rolling each individual article of clothing is taking more time than it’s worth, but it doesn’t take as long as you might think to get good at. Before you know it, army rolling your clothes will be second nature, and you may never look back.

This one might seem like a no-brainer, but you’d be surprised at how many moves produce piles of wrinkly and soiled laundry that could have been transported without incident.

The concept is very simple. For all the clothes that need to stay on hangers – nice dresses, suit jackets, button-ups etc – collect them in bunches of four to six, and wrap them entirely with a garbage bag. If you have garbage bags with drawstrings, tie these to the hangers to keep them firmly secured together. Otherwise, you could just use some string or a zip tie. This will give you bunches of protected laundry that you can stack and transport without fussing over.

Three – everything is a packing material

Get creative about what you can use as packing material or as a packing aid or prop. There are many soft things you’ll need to transport anyway – old bed sheets, towels, carpets, mats, pillows, cushions etc – that could be used to wrap or protect other items.

For example, if you need to move a dishwasher, or a nice wooden dining table, wrap it with old bed sheets to keep it protected from other things jostling around while in transit. Use pillows and cushions to separate it from other heavy furniture and hold it secure.

Four – how to get free cardboard boxes

While we’re on the subject of reducing the cost of your move, you should consider hunting around for nearby shops which might be throwing out boxes.

Try book stores, newsagents, furniture stores, hardware stores and candle stores first – they’re the most likely to have a high turnover of cardboard boxes that are still in good condition and don’t smell. Failing that, you could always try a local supermarket or petrol station.

Chances are, if you turn up to any store and ask if they have used cardboard boxes they would be willing to part with, they’ll smile at you and say you’re the one doing them the favour.

Fair warning: once you discover the cardboard box industry is a lie, and you can score free boxes from pretty much anywhere, you may develop a tendency to go a little overboard. Try to get 5-10 more boxes than you think you’ll need, and stop there. You don’t want to end up in a situation where you’re having to move cardboard boxes full of flattened cardboard boxes, on top of your other stuff.

Five – get into a Babushka Doll mindset 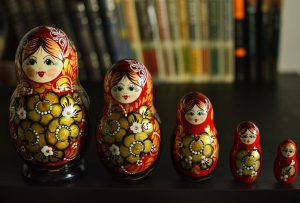 There is a staggering amount of empty space transported inside of boxes, pots, eskies and other containers during the typical house move. Try to notice when something could potentially store smaller items, if it’s going to have to be moved anyway. See the world as a set of potential Russian dolls.

Six – get ruthless about cable management

Cables tend to get away from us during a move, they get tangled, lost and confused – and soon you end up with a box full of them, half of which don’t appear to be compatible with any of the devices in your house.

Now that most people are at least part-cyborg, and have upwards of 15 digital devices plugged in around their houses, it’s super important to keep those cables labelled and organised. The simple way to do this is to wrap a piece of masking tape around each cable, with a little tag hanging out, and label the device this cable belongs to with a pen.

When it’s time to pack them away, roll them into a ring and bind them using breadties, string, tape or just tie them in a knot. This way, when you want to plug in your TV at the new house, you won’t get into an argument about which cable belongs to which device.

Photo by HiveBoxx on Unsplash

Moving house with dogs | Tips to keep your canine calm

Moving house is stressful enough for us, but especially for our dogs. Here's how to get your dog familiar with your new place safely.

Moving out of home as a first-time renter is daunting; everything feels new and there’s so much to learn. Here's the how-to from HOOD.

Want to move house like a pro? Here’s six moving life hacks that will turn your next shift into a tightly run operation.